Dallas Drake announced his retirement from the NHL at a 1:00 press conference today.

“I’ve played a long time and had a lot of fun,” the 16-year NHL veteran said.

Drake won his first career Stanley Cup with the Red Wings this spring in his first appearance in the Finals.

The Detroit Red Wings announced the signing of veteran forward Dallas Drake on Monday. As per club policy, the financial terms of the one-year deal were not announced. 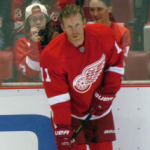