Larsson was the top goaltender in the Swedish Elite League for the 2007-2008 season, earning a 2.29 GAA and a .921 save percentage playing for Djurgardens.

“I think he’s interested in coming to North America. The expectation is he’ll be in Grand Rapids (next season),” Detroit general manager Ken Holland said. “He was voted the best goalie in the Swedish Elite League. I saw him play a game in late January. I like him, he’s got real good feet, good glove. He’s a good prospect.”

Larsson was selected by the Red Wings in the fourth round of the 2006 NHL entry draft.

The Detroit Red Wings signed defenseman Mathieu Dandenault to a one-year deal on Tuesday. Reportedly, the contract is worth slightly more than the $1.3 million qualifying offer the Red Wings made to Dandenault on July 1.

The Detroit Red Wings announced the signing of Swedish forward Mikael Samuelsson to one-year contract on Saturday. As per club policy, financial terms of the deal were not announced. 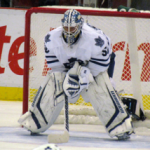