Reflections on the five-game winning streak and the losing streak that came before it, since I won’t be around for the games this weekend…

Much has been made of the Red Wings’ 4-8-2 slump through February. The calendar is an easy way to break up chunks of a long season. If you ignore the calendar and focus just on the schedule, you see that the slump was sandwiched by two five (or more, depending on how things go in the next several games) game winning streaks. Dividing the schedule up just a little bit differently gives a “slump” of 14-8-2 over 24 games.

That’s one of the reasons I wasn’t so worried during the slump. Everything balances out over a season. The Red Wings have had three winning streaks of seven games or more throughout the current schedule. They were due for some losses.

Of course, that’s not to say there were no worries in February. The slump showed how important Detroit’s defensemen are to the team. That’s why I really liked (and still do like) Ken Holland‘s move to pick up Brad Stuart at the trade deadline. He’s an important depth player and while he might not have been able to stop the slump on his own, I think a couple of those losses might have gone differently with him in the lineup.

The Wings haven’t been back to normal in this winning streak. They’re grittier but slower. Dan Cleary‘s absence has been felt. Johan Franzen is doing a great job of replacing Tomas Holmstrom but no one has quite replaced Cleary (though Tomas Kopecky is definitely trying in the limited time he gets). They’re making it work, though, and that’s important when looking ahead to the playoffs.

Something should be said of the Wings’ amazing run of 17 seasons in a row making the postseason. I think that number speaks for itself, though.

Over at A2Y, Bill’s been having people board the stress train for the last month. Some people will do that, sure thing. Me? No stress yet. Save it for the postseason.

Lidstrom is Superhuman and Other End of Season Ramblings

Yesterday I thought I was ready to dive back into NHL news and see what the rest of the hockey world was thinking. Turns out, I was wrong. 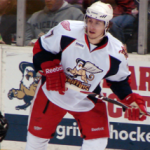 My Weekend Without Wings: Part One

The Red Wings face two Eastern Conference opponents this weekend but I've traded in those games for a couple others. Last night I skipped out on the Detroit - Montreal matchup to head to my first Griffins game of the year, a 4-3 Grand Rapids loss to the Texas Stars.

My Weekend Without Wings: Part Two

Turns out that I didn't miss the Red Wings' game in New Jersey Saturday night after all, so my weekend wasn't quite as Wing-less as expected. After missing Friday night's win over the Canadiens, I'd expected Saturday's Big Chill at the Big House to be all of my hockey for the day.