Filppula took advantage of Edmonton defender Dick Tarnstrom getting caught flat-footed at the Oilers’ blue line. Taking a pass from Pavel Datsyuk, Filppula gained the Edmonton zone and raced around Tarnstrom on the right wing, then pulled the puck to the inside and wristed a shot over the shoulder of goaltender Dwayne Roloson to put the Red Wings out in front for the game’s final seconds.

The goal came after a stretch that saw the Oilers able to pin the Red Wings in their own zone but unable to get a serious scoring chance.

Detroit had the only leads of the game, neither lasting for long.

At 4:00 of the second period, Henrik Zetterberg scored his tenth goal of the season on a Detroit power play to put the Red Wings out in front. Zetterberg took a cross-ice pass from Nicklas Lidstrom in the right circle and one-timed a shot past Roloson.

Only 1:49 later, Steve Staios put the Oilers on the board with a blast from the blue line off a faceoff in the Detroit end. The screened Red Wings’ goalie had no chance on the shot to the far corner of the net.

It was the only goal Osgood would allow on 16 Edmonton shots. Roloson stopped 32 of Detroit’s 34 shots.

Zetterberg’s goal was the only power play goal of the night. Each team had three power play tries.

The Red Wings close their road trip on Thursday night when they visit the Calgary Flames.

Detroit was without defenseman Niklas Kronwall for the second-straight game… Zetterberg’s goal gives him a 13-game point-scoring streak to start the season, one shy of tying the Red Wings’ franchise record… Dallas Drake and Johan Franzen returned to the lineup. 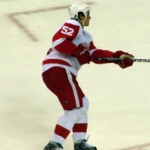 Red Wings Down Oilers in Shootout

Jason Williams and Henrik Zetterberg remained perfect in shootout attempts, each scoring on Saturday night as the Detroit Red Wings earned a 4-3 victory over the Edmonton Oilers with a 2-0 shootout win.

For the second time in three games, Valtteri Filppula scored on a penalty shot attempt, helping the Detroit Red Wings to a 5-2 win over the visiting Florida Panthers.