Red Wings’ free agent try-out Brett Sopel has signed a one-year deal with the Chicago Blackhawks. TSN.ca reports that the deal is worth $1.5 million.

The Red Wings had offered Sopel a deal before the defenseman took Chicago’s offer.

If a preseason game is played and it’s not on TV or radio anywhere, did it really happen? With a 6-1 final in favor of Detroit, the Rangers hope not.

I can’t say anything about the game, see the above paragraph. The Highlander live blogged the whole game over at RWC for those looking for details.

Another game that won’t be on TV, not even on Center Ice Online. I get the feeling that the Joe isn’t equipped for that. Would it surprise anyone?

At least Detroiters have radio, Rangers fans don’t even have that locally. With 1270 covering the Tigers, the Wings game will be on “Free FM 97.1” (whatever that name’s supposed to mean). Streaming audio should be available at http://cbsplayer.str…CALLSIGN=WKRKFM

Bruce MacLeod, the Highlander, has the Red Wings’ lineup.

Following a 4-2 exhibition loss to the Tampa Bay Lighting that saw the Red Wings ice a roster made up mostly of try-outs and youngsters, Detroit is gearing up for the regular season by bringing out more of their regulars and making another round of cuts.

Clark was fresh off a fight in the loss to the Lighting while Vicari was cut for the second time this season, having been brought back only hours after being released last week when Logan Koopmans was injured.

Tonight’s lineup against the Rangers will see more NHLers, with the return of defenseman Brian Rafalski and forward Tomas Kopecky. Neither has played in a preseason game this year, meaning that tonight will be Rafalski’s Red Wings debut.

Rafalski will be making his first appearance at the Joe with Detroit but Rangers forward Brendan Shanahan will not be on the ice for New York, meaning that his return to Hockeytown as an opponent will be delayed for another season. Shanahan went to the Rangers as a free agent last year but the two teams did not meet in Detroit. This season they won’t play each other at all.

The Detroit Red Wings played their first home game of the 2007 exhibition season Thursday night, dropping a 3-2 decision to the visiting Minnesota Wild.

Dominik Hasek started the game in the Detroit net, surrendering power play goals to Pierre-Marc Bouchard and Brent Burns on 13 shots against before Jimmy Howard took over in the Detroit crease.

Mark Hartigan got the Red Wings on the board, banging in the rebound after a shot from Matt Ellis rang off the post.

Minnesota picked up another power play goal when Brian Rolston was left all alone to pick up a pass at the back door, whipping a shot past Howard.

Mattias Ritola added Detroit’s second goal, puting a quick shot from the left circle off of a Minnesota defender and over the shoulder of Harding.

Harding finished the night with 28 saves on 30 shots. Howard made seven saves on the eight shots he faced.

The Red Wings will hit the ice again tomorrow when they host the Pittsburgh Penguins before visiting Pittsburgh on Saturday.

Not that many people in the Detroit area saw it, with the game not televised locally and NHL Center Ice Online not working for everyone, but the Red Wings opened their exhibition schedule with a 6-1 win over the Minnesota Wild.

Both teams iced almost-NHL-quality lineups. The Wild used five of their regular defenseman and both of their usual goalies while the Red Wings brought a lineup split beween NHLers and AHLers.

Unfortunately, not only was Center Ice Online not working but NHL.com in general is wrong. The league’s “official scoresheet” credits injured goalie Logan Koopmans not only with 24 minutes of playing time but also with a goal.

George Malik blogs that the win came dispite a stretch in the second period that saw the Wings outshot 14-1.

Over at Abel to Yzerman, they’ve been running a contest to replace the Red Wings’ slogan for this season.

Stupid slogan? Check. Out of date team logos? Check. Could have been made by a grade-schooler? Check. 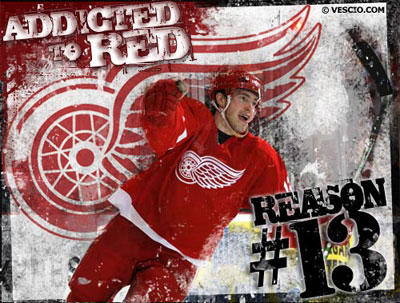 Now, I’m not a fan of “catchy” slogans in general, especially not ones you change every year (not that they’ve ever gotten rid of “Hockeytown,” which was once just a gimmick), but if a fan could come up with something that good, why couldn’t the team?

Christy Hammond over at BtJ just pointed out that former Red Wing Mathieu Schneider suffered a broken bone in his ankle in his first exhibition game with the Anaheim Ducks tonight.

The injury will put him out for at least four weeks, putting his earliest return at October 14, meaning he’ll miss the Ducks’ visit to the Joe for the Red Wings’ season opener on October 3.

Last week Bruce MacLeod, posted that the Wings would be inviting a handful of veteran defensemen to training camp as free agent try-outs. Specifically mentioned was the rumor that Brent Sopel (formerly of Vancouver, the NY Islanders, Los Angeles, and Vancouver again) would be one of them.

Today, MacLeod confirms that rumor. Three of the invitees are Sopel, Jassen Cullimore, and Aaron Downey.

Over at Abel to Yzerman, Bill posits that Sopel wouldn’t be invited if he weren’t promised a roster spot. Sopel would likely be one of the Wings’ top four defensemen, also taking time on the power play. With a top four of Nick Lidstrom, Brian Rafalski, Niklas Kronwall and Brent Sopel, it would look like Andreas Lilja is the odd-man out.

George Malik points out this morning that Red Wings Central has their training camp roster posted. I try not to pay too much attention to camp in seasons when the roster is virtually set, such as this one, but I do like taking a look at what sweater numbers the players are assigned.

Most players will never see time with those digits on their backs (does anyone really think Dominic Vicari would show up in the Detroit crease wearing #70?) but for players that have either spent time on the Red Wings’ roster in the past or are expected to make the team out of camp, this can be the first time we see what number they will wear.

The previously confirmed number change for Tomas Kopecky (from #28 to #82) is reflected on the roster, as is the re-assignment of #28 to newcomer Brian Rafalski and #17 to Dallas Drake. We also find that Russian prospect Igor Grigorenko has been given the #21 that was to be worn last season by Greg Johnson before he was forced to retire.

Two unexpected changes are found on the blueline. Kyle Quincey (who may or may not make the lineup this season, a casualty of limited roster spots) is switching from #45 to the #4 last worn in 2006 by Cory Cross. Derek Meech, who has spent limited time with the Red Wings wearing #36 but is expected not to be sent to Grand Rapids as he would have to clear waivers, has taken on the #14 formerly worn by Brendan Shanahan.

I’m a bit surprised by the Red Wings giving out Shanahan’s number only a season after his depature to New York. It had to happen sometime, I don’t think there’s a whole lot of a push to have the #14 retired for Shanny, but it seems like the team would have waited longer.