It’s been awhile since I blogged, with nothing fantastic or fantastically bad to scream about, so I figured I’d add the following information and rumors as a public service announcement.

For those lucky enough to have tickets to the January 2 game against the Anaheim Ducks – a group which I am extremely thankful to be a part of – the Red Wings are finally putting out information about the pre-game events surrounding Steve Yzerman‘s number retirement.

There will be giveaways for fans in attendance but I don’t know exactly what those will be. The same giveaways will be available at the Hockeytown Cafe.

There are rumors that the JLA camera policy will be relaxed for the night but, considering that the arena raised their minimum lens size this season already, that might not be true.

I do not know if pre-game warmups will take place before or after the ceremony. In previous ceremonies by other teams, warmups were followed by the sweater retirement and then the game began. However, those ceremonies usually were conducted at the scheduled game time, this one is an hour early.

I will provide more information as it becomes available and I encourage readers who know more to post in the DH.N forums.

Yzerman's Jersey to be Retired After New Year

The Red Wings made official on Wednesday what has been known for years: No Detroit player will ever again wear Steve Yzerman's No. 19 jersey.

The Red Wings' PR office confirmed that Steve Yzerman is not un-retiring this fall. 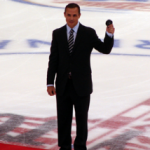