The Detroit Red Wings wrapped up their exhibition schedule Sunday night with a 3-2 shootout win over the Original Six rival Toronto Maple Leafs.

Jiri Hudler and Henrik Zetterberg scored in the shootout while only Mats Sundin could beat Detroit goalie Chris Osgood.

Sundin and Pavel Kubina – who was later ejected after cross-checking Hudler in the face – scored Toronto’s regulation goals, while Kris Draper and Danny Markov scored for Detroit.

A goal by Raffi Torres in the seventh round of the shootout lifted the Edmonton Oilers over the Detroit Red Wings Saturday night, just one night after the Red Wings fell to the Calgary Flames.

The Red Wings wrap up their preseason exhibition schedule this afternoon with a matchup against the Swedish Elite League's Farjestads BK at their home arena in Karlstad. 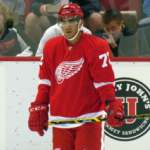