During the Great Hockey Stoppage of 2005-06, the Hockey Rodent put together some of what I consider the best coverage of the worst that the NHL had to offer. Over a year later, he’s continuing with a rant posted at his site called “Why The Lockout?”

The Rodent should be required reading for anyone who vaguely paid attention to the lockout and once again he cuts to the heart of the issues.

I won’t copy him word-for-word, of course, but his basic idea is just reiterating the fact that the NHL lied to the fans the whole time. It comes down to the question of how can so many teams be spending at (or over, in the case of the New Jersey Devils) the salary cap if the league’s argument during the lockout was that the teams were too poor to do so.

As I said all along, lowering player salaries doesn’t increase revenue. Where did the teams find that extra cash?

And to make matters worse, New Jersey is actively trying to get around the cap in order to have all their players on the roster for opening night.

Read the Rodent for the whole thing, just don’t expect to be happy with what you see.

The National Hockey League's lockout of its players association officially began at midnight tonight with the expiration of the collective bargaining agreement between the two sides.

On Mike Ilitch and Coming Lockout 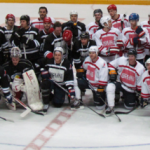 Thoughts on "Rock Out the Lockout"

I'm not going to try to do a blow-by-blow recap of Team White/Red's 17-11 win over Team Black in the "Rock Out the Lockout" charity hockey game at Windsor's WFCU Centre on Saturday night. Too many goals and I wasn't keeping notes. I'm sure the Windsor Star's Bob Duff will have something good to cover it.