The Detroit Red Wings finally wrapped up one of their “big three” restricted free agents, announcing Friday that Niklas Kronwall had signed a two-year deal. As per club policy, financial details were not announced, but reportedly Kronwall will earn just under $2 million over the life of the deal.

Kronwall shone in the games he played with Detroit before a leg injury sidelined him in 2003-04. His play with the Grand Rapids Griffins during the 2004-05 season earned him the Eddie Shore Memorial Trophy as the American Hockey League’s top defenseman.

“He’s not imposing to other players until he hits — then he’s imposing,” Nill said. “He hit a guy in center ice, with his shoulder, a clean hit. The guy had his head down, and he ended up with a broken jaw and a concussion.”

Management hopes that Kronwall will continue to play that kind of game in the NHL, slotting him as one of Detroit’s top four defensemen, alongside Nicklas Lidstrom, Mathieu Schneider and Jiri Fischer.

With Kronwall’s signing, general manager Ken Holland only has young superstar forwards Pavel Datsyuk and Henrik Zetterberg left to sign. Datsyuk is entertaining offers from Russian club Moscow Dynamo but his agent states that his priority is to return to Detroit.

Detroit Red Wings defenseman Niklas Kronwall has been suspended for one game, the National Hockey League's Department of Player Safety announced on Tuesday. 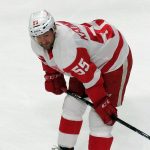 The Detroit Red Wings announced on Monday that they have signed defenseman Niklas Kronwall to a seven-year contract extension.