It was another milestone night for Brett Hull, and this time, the goal counted towards a win. Hull scored his 732nd career goal 1:51 into the overtime period to lift the Red Wings to a 3-2 win over the Los Angeles Kings and move into sole possession of third place on the all-time goals scored list, behind only Wayne Gretzky (894) and Gordie Howe (801). The Red Wings started the scoring early in the first period. In fact, they scored on their first two shots of the game. Brendan Shanahan got the crowd in the right mindset to see milestone goals by scoring his 544th career goal 2:27 into the first period. Mark Mowers made a sharp pass from behind the net, and Shanahan snapped off a shot which bounced off the left leg pad of goalie Roman Cechmanek and into the net. The goal tied Shanahan for 19th place overall with Maurice “Rocket” Richard.

Pavel Datsyuk didn’t break any records with his goal, but the Los Angeles defensemen may have broken something else afterwards, by kicking themselves for leaving Datsyuk unwatched. The goal came on the power play, with Kings’ captain Mattias Norstrom in the penalty box for hooking. Datsyuk left a drop pass for Hull on the left wing side, then circled around behind the net. The Kings all seemed to be keeping an eye on Steve Thomas in the high slot, so no one was ready for Hull to thread the puck through the goal crease to Datsyuk on the far side. Datsyuk banged the puck past Cechmanek to put the Wings up 2-0.

The Kings were hardly ready to give up being down by two goals. They refused to sit back, forcing Dominik Hasek to make some strong saves. Hasek held firm until he lost his temper late in the third. Los Angeles was in the middle of a shift of sustained pressure in Detroit’s zone. In all fairness, there could have been a goaltender interference penalty against Luc Robitaille, but none was forthcoming. Hasek appeared visibly upset, and thus was not set to stop Michael Cammalleri’s one-timer off Robitaille’s pass.

The goal gave the Kings new life, but they weren’t able to tie up the game until they got a lucky break. Steve Thomas was unable to handle Jiri Fischer‘s pass along the boards in the Red Wings’ zone. Martin Straka, recently acquired from the Penguins, grabbed the puck away and took a hard shot which beat Hasek high.

The Red Wings controlled the overtime period from its beginning, however. Hull’s historic goal was set up by Jason Woolley holding the puck in at the Los Angeles blue line, stick handling around two skaters, and sending the puck up to Mathieu Schneider. Schneider made the pass across the rink to Hull, who was ready and waiting with his classic one-timer. The puck sailed up and bounced over Cechmanek for the win.

Los Angeles outshot Detroit by a count of 28-20. The Red Wings’ next game will be on the road, Wednesday night against the Buffalo Sabres.

Ray Whitney started this game, but didn’t finish. He left sometime during the second period. Prior to tonight, Whitney had missed ten straight games with a strained groin…. Chris Chelios left the game with an injured right knee after colliding with Cammalleri late in the first period. Chelios tried to play a shift early in the second, but had to leave the ice.

It took the Red Wings awhile to get the game going, but Luc Robitaille's landmark 610th career goal got them started, and they went on to beat the Vancouver Canucks 5-4.

Steve Yzerman and Jason Woolley each played their first game of the season Thursday night as the visiting Detroit Red Wings picked up a 5-2 victory over the Los Angeles Kings. Both players were held without a point on the night. 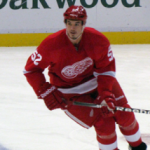