The San Jose Sharks, likely to miss the playoffs this season after coming within one game of advancing to the Western Conference Finals last spring, have traded captain Owen Nolan to the Toronto Maple Leafs.

Nolan’s twenty-two goals will be good for third on the Maple Leafs this season, behind Alexander Mogilny (27-43-70) and Mats Sundin (30-26-56). Nolan also has twenty assists, giving him forty-two points in sixty-one games for San Jose. He has amassed 323 goals and 352 assits for 675 total points in his 836 game career.

McCauley has scored six goals and added nine assists in sixty-four games for Toronto this season. In 304 career games with Toronto, he has thirty-three goals and forty-nine assists.

Less than a week after acquiring right wing Owen Nolan from the San Jose Sharks, the Toronto Maple Leafs made another move to strengthen their team for a playoff push, adding defenseman Glen Wesley from the Carolina Hurricanes.

The deals continue as the NHL's March 11 trade deadline approaches. 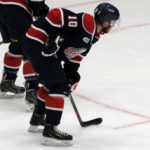 The Detroit Red Wings announced on Thursday the acquisition of prospect forward Dylan Sadowy from the San Jose Sharks.