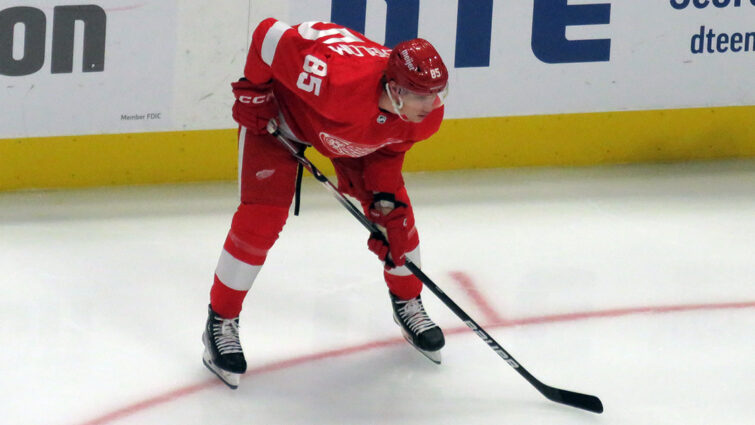 I was running around quite a bit this weekend so I didn’t get a chance to put together any thoughts on the Red Wings’ first two games.

I’d been really interested in seeing how the team’s new lines would work out against real competition.  We got to see a bit of that against Montreal on Friday but Tyler Bertuzzi’s first-period injury against the Devils kicked the line blender into action.

This is all based on the eye test so I could be horribly wrong about actual impact and I’m okay with that.  Against Montreal, I was really impressed by the third and fourth lines.  Game One hero Elmer Soderblom seems to belong in the NHL, though this is obviously a small sample size.  Michael Rasmussen looks like he’s continued his development from last season very nicely.  I’ve been hard on Adam Erne in the past and I was confused as to why the Wings would keep Joe Veleno on the roster just to bury him on the fourth line but that was a solid defensive unit.

I was actually really surprised to see Veleno sitting for Pius Suter in New Jersey.  I understand needing to get Suter into the lineup and if they were going to pull out anyone, the fourth line center was a logical choice.  It just felt weird.  Especially when they didn’t make a move to get Filip Zadina in.

I was less impressed with the top two lines against the Canadiens.  It just felt like there were more misfires than I’d like to see there.  The second line, with Andrew Copp having missed the entire preseason, can be excused.  The top line, having played together all last season, not so much.  But, again, small sample size.  And, also, Jake Allen played a great game so if I’m judging those lines on offensive output (again, eye test, I haven’t looked up actual shot quality or anything like that), that has to be taken into account.

Coming back to Zadina…  If Bertuzzi is out tonight against the Kings, do the Wings drop him in on the top line?  I kind of think they should.

Note: After I wrote this but before publication, lines were noted that had Jakub Vrana out as well as Bertuzzi, with Zadina on the second line, Dominik Kubalik on the first, and Suter shifted to wing on the fourth.  That could be interesting, though injuries to two top-six forwards after only two games is worrisome.

On defense, I was really surprised by Robert Hagg, having not seen anything of him in the preseason.  I really like all three defensive pairings right now, it doesn’t feel like anyone is dragging their partner around.

In goal, it would have been nice for Alex Nedeljkovic to not give up the early goal to the Devils but he was strong later in the game.  Ville Husso looked great in his debut, with some credit to his defense for keeping it quiet early on.

But I repeat the caveat that all of this is strictly based on the eye test and is a very small sample size.  All these good feelings could get thrown out the window with a poor effort against Los Angeles in Game Three.

David Perron and Ben Chiarot wore the “A”s in the home opener, then Andrew Copp and Moritz Seider did on the road in New Jersey.  Perron and Chiarot were not a surprise, and I don’t think Copp should have been either.  Seider is clearly the Wings’ top defenseman but in just his second season, I’m surprised to see him with a letter.  I wonder if this whole alternate captaincy rotation thing is, at least in part, a way to ease Seider into that role.

Head Coach Derek Lalonde has stated that the team won’t name alternate captains right away.  Last year the New York Rangers had no captain and rolled a six-member “leadership group,” rotating the “A”s amongst them.  The difference between what they did and what the Wings are now doing is that the Rangers announced their group at the start of the season while Detroit seems intent on explicitly not naming anyone (other than Captain Dylan Larkin, of course).

It seems odd to me that the Wings don’t name names.  The guys in the room know who the leaders are, no matter who wears a letter.  If they know, all not announcing anything does is keep the fans in the dark.  Of course, I acknowledge that I geek out about letters more than most, so maybe it doesn’t matter.

New on DetroitHockey.Net for this season is Stupid Stat of the Day posts.  These went out to Twitter and Facebook last year and now they’re getting posted to the site, too.  All of the previous SSOTDs have been imported into the blog, so this also makes it easy to find them all in one place.

My photo gallery is now over at the DH.N Projects site. I took a bunch of photos at the home opener that I haven’t had a chance to look at yet; I’ll get them added over there as soon as I can.