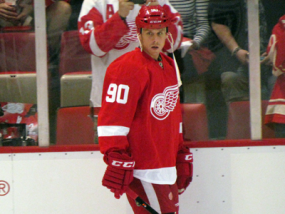 61
0
by Clark Rasmussen
In General News

The Detroit Red Wings held off a late comeback attempt by the Panthers on Tuesday night, claiming their sixth consecutive victory in a 5-4 decision over Florida.

Brad Boyes scored with 9:06 remaining in regulation to pull the Panthers to within a goal. After the Red Wings failed to clear their zone, Alexsander Barkov drove back towards the net before passing off to Boyes all alone in the slot for a shot past Detroit netminder Petr Mrazek.

The Red Wings would survive a Panthers’ power play in the final minutes, during which they pulled their goalie for a sixth attacker.

Drew Miller opened the game’s scoring at 8:06 of the first period, beating Florida’s Roberto Luongo between the pads on a shorthanded break.

Barkov would tie things up just 1:02 later while skating five-on-three. Barkov was wide open at the back door to take a crossing feed from Nick Bjugstad and beat Mrazek to make it 1-1.

Before the second penalty was out, the Panthers would score again. Brandon Pirri’s shot from the left faceoff circle just slipped past Mrazek and across the goal line, with defenseman Danny DeKeyser clearing it away a fraction of a second too late, giving Florida a 2-1 lead with 9:44 left in the period.

Henrik Zetterberg tied things back up just 32 seconds into the middle frame, taking a feed from behind the net all alone in the slot and putting it back past Luongo.

Luke Glendening put the Red Wings back in front at 7:07 of the period, lifting the rebound of a Stephen Weiss chance past Luongo during a scramble around the net.

Weiss would add a goal of his own against his former team just 1:19 later, tapping the puck past Luongo of a centering feed from Riley Sheahan.

Glendening scored again with 8:41 left when Weiss’ attempted shot on a rush was blocked right to Glendening to snap a chance past Luongo from in close for a 5-2 lead. Luongo would be replaced in goal by Al Montoya shortly afterwards.

Bjugstad made it 5-3 with 4:30 left in the second on Florida’s third power play goal, lifting the rebound of an Aaron Ekblad shot over Mrazek’s shoulder.

Mrazek finished the night with 37 saves on 41 shots against. Luongo stopped 12 of 17 shots before Montoya came in and was perfect on ten shots faced.

Florida went three-for-five on the power play while Detroit failed to score on their lone chance with the man-advantage.

With their win and Tampa Bay’s loss to the Carolina Hurricanes, the Red Wings move into the top spot in the Atlantic Division… Daniel Cleary appeared in just his twelfth game of the season, replacing Teemu Pulkkinen in the lineup. Pulkkinen had been returned to the Grand Rapids Griffins so he could appear in the AHL All-Star Game… Tomas Jurco (back) and Jakub Kindl (wrist) remained out due to injury while Brian Lashoff was a healthy scratch.