The Macomb Daily’s Chuck Pleiness broke the news today that Red Wings forward Joakim Andersson will be switching his jersey number from #63 to the #18 he wore in Sweden and with the Grand Rapids Griffins.

“It looks like it,” Andersson said when asked if he was switching numbers. “They haven’t talked about it with me, but I had the No. 18 in Grand Rapids and in Sweden as well, so it looks like they’ve changed it.”

The change was telegraphed at the Red Wings’ summer development camp, when Philippe Hudon was assigned #63.

Tomas Tatar‘s #21 was also assigned at development camp, having been given to Luke Glendening. Tatar had requested #90 earlier in the summer and it appeared he would be changing but that number ended up being given to free agent signing Stephen Weiss, whose usual #9 is retired in Detroit for Gordie Howe. Instead, Tatar will keep #21 and Glendening will take the #41 of Landon Ferraro, who switches to the #29 he has worn with the Griffins. 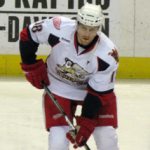