With the Red Wings confirmed to host the Maple Leafs in the 2013 Winter Classic, the first question everyone seems to be asking is “How do I get tickets?”

The second question seems to be “What jersey will they wear?”

I’ll be taking a look at options for the second question between now and whenever they officially roll out their Winter Classic look. I think it’s safe to say that the design will have a “vintage” look, whether it’s a true “throwback” by being something the team has actually worn in the past or a “fauxback” that just looks like it could have been worn sometime in their history.I’ll start with a fauxback inspired by the 1928-29 Detroit Cougars sweaters. 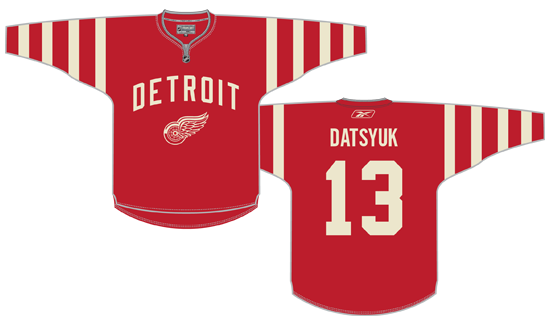 Why I made the changes I made:
The original sweater was white with red details. As the Wings will be playing at home, they can be expected to wear a dark jersey so I’ve switched the design to red with white details. Additionally, I went with “vintage white” and a darker red rather (the same red the Rangers used in the 2012 Winter Classic) than a true white and the Wings’ actual red. I dislike the trend of doing that but it is a trend and I can see the Wings following it.

I swapped out the poorly-rendered cougar head for the Winged Wheel because I don’t see the Red Wings wearing a logo that stands for a different team name. In 2009 they could wear the Old English D because it stands for Detroit. No such justification for that logo.

Other design decisions:
A handful of things I did just because it’s what the Wings did in 2009. Sleeve numbers were left off (which was disappointing in 2009 but makes sense with all the stripes on this design) and the Montreal Canadiens’ nameplate font was used (which I think looked fantastic last time around).

My template doesn’t show it but I’d expect a lace-up collar.

Additional reasons I think this could be worn:
Though this is inspired by an NHL jersey, there’s a distinctly collegiate look about it. Whether in script or block lettering, college teams have a history of wearing their names rather than a logo on the front of their sweaters. Playing in Michigan Stadium, this look ties into both the Wings’ franchise history and that of the venue’s owner.

The trend in the Winter Classic has shifted from true throwbacks to fauxbacks. The 2012 version of the game was the first time that neither team’s sweater was one taken directly from their history.

Disclaimer:
I have no advance knowledge of what the Red Wings or the Maple Leafs will wear on New Year’s Day, this is just a concept of something Detroit could wear.

I know my template isn’t perfect. I’m admittedly too lazy to fix it. I already mentioned that I expect the sweater to have a lace-up collar and I know the Reebok vector would be replaced by their wordmark. 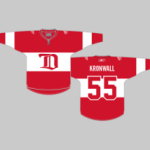 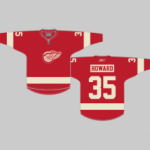