While financial terms were not officially announced, the contract is reportedly worth $525,000 at the NHL level. Maltby would earn $105,000 while playing in the AHL, the maximum allowed for players on a two-way contract without having to clear re-entry waivers.

Maltby is likely to start the season in Grand Rapids as there are already six forwards fighting for three spots on the Red Wings’ fourth line. Justin Abdelkader, Darren Helm, Patrick Eaves, Kris Draper, Drew Miller and Mattias Ritola are all fighting for a spot in the lineup, with either Miller or Ritola expected to be moved before the start of the season.

The Detroit Red Wings waived forward Mattias Ritola on Monday. If he goes unclaimed, he will be sent to the Grand Rapids Griffins.

The fourth line of the Detroit Red Wings was not expected to contribute offensively in the 2006 Stanley Cup Playoffs, instead being used in a defensive role. Kirk Maltby showed on Friday night that maybe they can do both, as he scored the game-tying goal in the third period and the game-winning goal in the second overtime while the Red Wings defeated the Edmonton Oilers in Game One of their first round matchup. 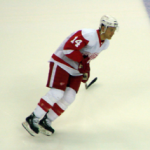